Shakes Mashaba harbours no grudges against Bafana and Quinton Fortune 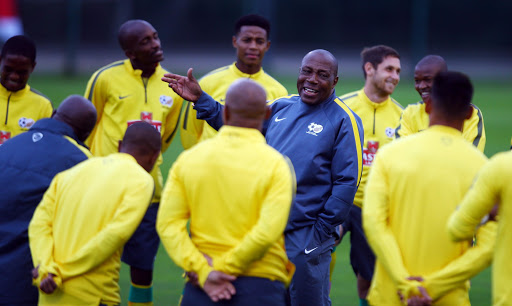 Eyebrows were raised after former Bafana Bafana coach Ephraim “Shakes” Mashaba declared his loyal and passionate support for the national team ahead of Friday's away 2018 World Cup qualifier against Cape Verde.

Mashaba was at the helm when the World Cup qualification programme began last year but the burly mentor was suspended after a heated altercation with South African Football Association (Safa) officials in November last year and was later fired.

He was sacked for “gross misconduct‚ insubordination and violating his employer's communications policy”.

But he left Bafana in a strong position to qualify for the 2018 global showpiece as coach Stuart Baxter's charges are second in World Cup qualifying group D after two matches‚ level on four points with Burkina Faso‚ who only lead on goal difference.

His axing led to a protracted legal battle with Safa and it seemed the relationship between the two parties had suffered irreparable damage when he faced off against his erstwhile employer at the Commission for Conciliation‚ Mediation and Arbitration early this year.

He insisted that he remains fully behind Bafana‚ even though his bitter standoff with Safa was eventually settled out of court in June.

“I am very much behind the team‚" Mashaba said.

"Nothing has changed with regards to my passion and love for South Africa.

"I cannot work against any South African national team or individual competing on the international stage because they represent me.

South Africa enter their crucial FIFA World Cup qualifier double-header against Cape Verde over the coming week with a strong record in the ...
Sport
4 years ago

"I am backing them all the way together with my all members of my family because we believe that they can do it and qualify for the tournament.

"I remember the other day (in June) when we played and beat Nigeria 2-1 (in a 2019 African Nations Cup qualifier)‚ we were all glued to the television‚ shouting and rooting for the boys.

"I looked at everyone and there was not one who was pretending to be supportive.

"Everybody was genuinely happy for the team and we celebrated genuinely.”

Mashaba said Baxter's charges must target all the six points on table when Bafana face Cape Verde in back-to-back qualifiers in the coming days.

Cape Verde will host Bafana on Friday night at the Estadio Nacional Stadium and the return leg match will be played on September 5 at the Moses Mabhida Stadium in Durban.

“They must get all the six points out of the two matches against Cape Verde to make things a little bit easier for us going forward‚" Mashaba said.

"It is going to be a difficult game for us‚ considering the state of the pitch and the weather.

"But I think coach Stuart Baxter has done a good job in terms of preparing the team.”

Mashaba also pleaded with the public not to judge former Bafana midfielder Quinton Fortune too harshly after the retired player sparked outrage following his elevation to Baxter's technical team.

Fortune thumbed his nose at numerous Bafana call-up letters at a time when his country needed him the most and he eventually succeeded in turning public opinion against him.

The former Manchester United player snubbed a succession of Bafana coaches during his playing days and incensed fans have used social media to communicate their unhappiness with Baxter's plan to hire the polarising figure.

But Mashaba was more forgiving‚ even though he was also snubbed by Fortune during his previous spells as Bafana coach.

“We should not compare today and yesterday‚" he said.

"People should not judge him based on what he did at the time he was a player but they must look at what he can offer at the moment.

"He did that when he was still a player and it can happen that he is a changed person now.

"Now he is a coach and he deserves another chance at Bafana Bafana‚” he said.