Pie-Pacifique Kabalira-Uwase bore witness to the atrocities as a young boy, which he recounts in his book. 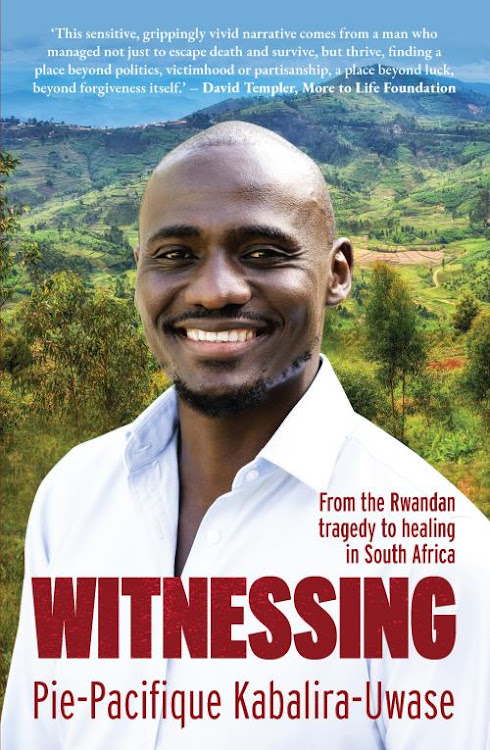 Pie-Pacifique Kabalira-Uwase bore witness to the genocide — committed by the ruling extremist Hutu-government intent on eradicating the country’s Tutsi minority and those opposed to their totalitarian policies — as a young boy.

The teenager had one option if he wanted to survive: fleeing his home country.

Initially, Kabalira-Uwase prepared to escape to Canada but found himself in SA owing to a scam which left him destitute.

While working as a car guard in Durban’s city centre, he studied between shifts, eventually enrolled at UKZN, graduated with a degree in physics, and was awarded the prestigious Mandela-Rhodes Scholarship.

Kabalira-Uwase recounts his lived experience of the war, seeking asylum, and his present in Witnessing: From the Rwandan tragedy to healing in SA, published by Kwela Books.

Here he shares his story.

Were you set on Witnessing as a title or did you have any working titles in mind?

When I was finally comfortable with writing, the first manuscript got so big I thought it would have to be cut into three stories: Rwanda, Refugee Strife and Now. I had a working title for the series: Beyond Forgiveness.

Eswatini-born Ntsika Kota, 29, was announced as the winner of the Commonwealth Short Story Prize 2022 on June 21.
Books
1 month ago

And each part had a subtitle. Witnessing was for the part on Rwanda, while the part about being a refugee was to be Becoming. I was still working on the third part. So when I submitted my manuscript, it was the first book, and the title was Beyond Forgiveness: Witnessing.

It was through engagements with the publisher and editor that we settled on Witnessing and added a little about my refugee journey. But the original intention of the title Witnessing remained: I had to go back in time and intentionally witness it all myself. And then, in writing, invite others to witness with me.

In the prologue you write the following about friends of yours, siblings Eric and Erin:

Eric and Erin had left Rwanda for SA in 2002, and had at first stayed with family friends in Cape Town. But they soon moved out to live on their own, and like many African immigrants arriving in the major cities of SA, they struggled, barely making ends meet as car guards. When they eventually managed to get asylum papers and a chance to study, Eric realised he had a choice to make: continue his own tertiary education while they both battled for survival, or work to earn a living for them both. He decided to keep working while his sister studied.

Please elaborate on the similarities and differences you share(d) with Eric, from fleeing Rwanda to arriving in SA.

Eric and I grew up in the same neighbourhood. Our houses were adjacent to each other. Though we were on the opposite ends of the economic spectrum (his parents were considered well off, while we grew up with a widow mother of three public servant), we experienced pre-94 in the same way. They had managed to escape Kigali and crossed over to Zaire while we stayed in Kigali. So while I experienced atrocities from the 1994 genocide, Eric lived the arduous journey of Rwandan refugees when the camps were destroyed in 1996. This made our conversations about our country’s recent history substantial. Our eyes were each other’s window into the aspect of the suffering we hadn’t witnessed.

When we returned to Kigali, our house was marked “occupied”. We reclaimed it before it was occupied. His family’s properties, while they were in Zaire, had been taken. I witnessed his family navigate the treacherous journey of reclaiming what belonged to them, mostly from powerful military men in the new Rwanda.

When I left, I was 20 and had just finished high school. Same with Eric and Erin. We both had to leave family. And SA was not the destination for both. I didn’t know where I would end up. Neither did Eric! I was betrayed by people I relied on along the way. They were betrayed by people who received them in SA. Unbeknown to me, they went through Durban on the way to Cape Town. I stayed in Durban. Once in Cape Town, they started as car guards just like I did when I arrived in Durban.

Mila de Villiers speaks to Wole Soyinka about his latest book and why it took him 50 years to write a new novel.
Books
10 months ago

Then came the struggle for access to education. Eric decided to put his dream on hold to give his sister priority and support her. Eric was there the first time my mother came to visit me.

In a surprising turn of events, our first children, both daughters, were born two days apart in March 2022!

Chapter eight (‘Blood flows in the neighbourhood’) recounts you — in April 1994, aged 13 — witnessing one of many atrocities committed in Kigali during the Rwandan genocide:

The churchmen, no longer singing, were ordered to sit on the tarmac. They complied. Moments later, the carnage began. The Interahamwe hacked the men with machetes and axes, hit them with hammers and clubs, and stabbed them with sharp sticks. Blood splashed all over those being killed and over those killing them ...

How did bearing witness to a violent act at such a young age influence your psyche? And how have you processed your trauma?

For a long time, I appeared normal as everyone around me shared the similar stories. As I grew up, we didn’t really talk about it. The horror of what I lived through truly struck me when I started the journey to healing here in SA. That’s where I realised the absurdity of what I was sharing: that at 13, I saw people familiar to me kill people familiar to me, day in, day out, in front of my eyes.

The first consequence I remember was a deep fear of people in any kind of confrontation or conflict. I inherently just avoided any kind of disagreement, became overly polite and had an almost perpetual smile on my face as if to signal I was harmless. I feared the worst if anyone believed I wasn’t. I had an unconscious fear of being like the men I had witnessed, so I unconsciously sought to do the opposite: be nice. But it was not genuine. It was compulsive. The first time I became aware of that smile, I realised the discomfort and tension in my face.

The realisation of how potentially damaging it all was hit me when I started realising how important it was for me to share. Processing this was painful. I had to intentionally relive some of the events. I was privileged to have people who listened and held me though it all. They gave me a lot of time over the years that helped me gradually release myself from unconscious beliefs and compulsive behaviours I had put in place as a survival mechanism. Releasing myself from all that involved a lot of counselling, sometimes screaming, and sweat and tears as I was fighting, sometimes in a physical way. Fortunately, it was all in settings intended for dealing with such trauma.

Bron Sibree talks to Amitav Ghosh about nutmeg and how it illuminates the story of colonialism, capitalism and the modern geopolitical order.
Books
5 months ago

I feel so sad that most of my fellow Rwandans will never have such an opportunity, and wishing that somehow, with time, healing will be a reality for us all.

Were there memories you especially struggled with during the writing of the book? How did you carry on writing, if yes?

There are memories I struggled to write about for various reasons. Some because it was too painful for my family, others because I simply was too scared to open myself to that again. But one memory stands out: the woman whose legs have been hacked off on the side of the road. Her eyes haunted me. I remember caring about her and literally having a little ceremony to let her go.

And the most difficult chapter to write was when I was recounting what happened in one of those healing moments, when I was dealing with a memory of a shooting. While I wrote, I was not sure if I was really conveying what was happening in the room, because I was not observing or leading it, I was in it.

If you were to say to your 14-year-old self that you’d graduate from university, be the recipient of the Mandela-Rhodes Award and founder and director of PEM Afurika, how would he respond?

“Wow! First, I am sorry that I witnessed all that, and that gave you a really hard time. I had no idea how deeply it would affect you. But you, you did well. Thank you for not giving up. I never thought of all the things you achieved. I just wanted a normal life, go to university and hopefully become a pharmacist like mother wanted, or be a wealthy and generous man like uncle was. Well, this is not the end. It is only the beginning. I am curious to see what else you will get up to!”

Emmanuel Taban was born into rural poverty in South Sudan, one of Africa’s most deprived regions, though richly endowed with natural resources.
Books
8 months ago