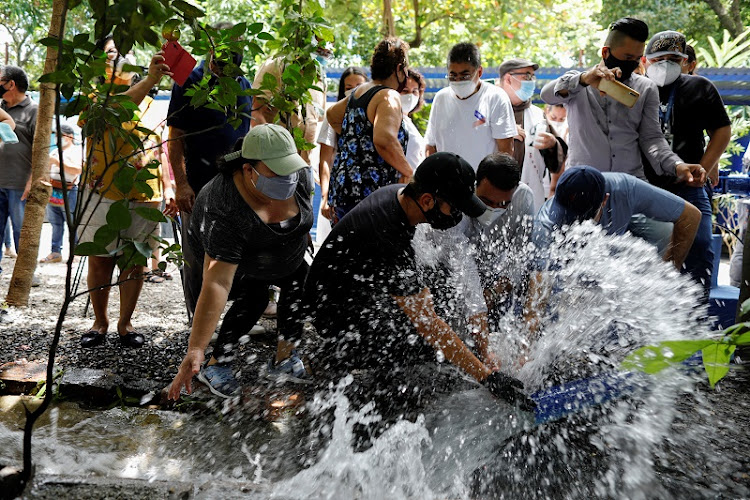 Residents of Los Conacastes neighborhood and government officials participate in a ceremony of reopening of a well to solve a failure in the water supply network that has affected the residents, as the coronavirus disease (COVID-19) outbreak continues, in Soyapango, El Salvador August 20, 2020. Picture taken August 20 2020.
Image: REUTERS/Jose Cabezas

SA recorded another 2,585 new Covid-19 infections in the past 24 hours, the health ministry said on Thursday.

This brings the total number of infections nationwide to 618,286.

Experts advising the government on Covid-19 health protocols have outlined how gyms can open safely.

Health minister Dr Zweli Mkhize on Thursday made public dozens of advisories from the ministerial advisory committee (MAC) on Covid-19. One of them, dated July 23, outlines how important gyms are to helping SA have a more helpful population - but how they can operate safely.

The guidelines were developed based on global best practice and reviewed by leading medical experts, according to the document. They refer to lockdown levels 3 and 2, with more guidance to be provided for level 1.

Experts warned that lockdown laws on clothing sales were 'inappropriate'

Remember when you couldn't buy sandals and other open-toed shoes due to SA's lockdown laws?

Well, it emerged on Thursday, the panel of experts advising the government on its regulations to curb the spread of Covid-19 had not only not been consulted on these rules, it found them “inappropriate and unnecessarily intrusive”.

Experts warned that lockdown laws on clothing sales were...

The government seemingly ignored advice from a panel of experts when it allowed taxis to fill up to maximum capacity.

The experts, in two letters written six days apart in early July, recommend that taxis should not be allowed to fill up beyond 70%. In fact, the experts stated that in areas where Covid-19 cases were surging, only a 50% occupancy should be allowed.

Instead, taxis were allowed to operate at 100% capacity.

SA not a 'sinking Titanic' amid Covid-19 corruption icebergs: Ramaphosa

President Cyril Ramaphosa has insisted that SA is not a “sinking Titanic” after shocking allegations of corruption related to procurement of Covid-19 personal protective equipment (PPE) worth more than R11bn.

Ramaphosa, instead, told MPs in the National Assembly that he was leading the country into a “new era and new dawn” of fighting corruption in all areas of government procurement.

Several party leaders, such as the DA's John Steenhuisen, Julius Malema of the EFF and Kenneth Meshoe, repeatedly told Ramaphosa during an oral question-and-answer session that he was “too weak” in fighting corruption, and that the “Titanic was sinking”.

SA not a 'sinking Titanic' amid Covid-19 corruption icebergs:...

Tighten drinking and smoking laws even when Covid-19 is gone: experts

SA should consider additional regulations around booze and smokes, even when Covid-19 is no longer a factor.

This was one of the pieces of advice the Ministerial Advisory Committee (MAC) on Covid-19 gave to health minister Dr Zweli Mkhize 10 days ago. The committee said while there were no longer medical reasons to maintain the prohibition on alcohol and tobacco products as the country moved to level 2 lockdown laws, these two products needed to be looked at in the future.

“There may be many non-Covid-19 related reasons for additional controls on both tobacco and alcohol, such as increased taxes and controls on quantities. These should be implemented separately at a later stage unlinked to Covid-19,” the committee said in a letter dated August 17, the day SA moved to level 2.

Tighten drinking and smoking laws even when Covid-19 is gone: experts

Speaking at a media briefing held at the stadium, Buyeye said that because of a decrease in the number of patients entering the facility, the municipality did not believe it was financially viable to continue using the stadium as a field hospital.

When Rhulani Baloyi, a registered nurse at Klapmuts Clinic in the Cape winelands, fell ill in June and ended up being hospitalised for a week, there was no-one to look after her 15-year-old daughter.

But the distraught teenager didn’t have to look very far for care and reassurance. Her mother’s colleague Dr Caroline Nilsson immediately assumed the role of mother to her, thanks to Baloyi’s kindness and the spirit of giving which motivated the doctor to give back to her.

Covid-19 inspires goodwill as doctor becomes 'mom' to daughter of...

KwaZulu-Natal now has 11 096 confirmed cases of Covid-19, 94 680 of these have recovered, the province said on Thursday.

President Cyril Ramaphosa will next week receive the first report from the multidisciplinary “fusion centre” which has been tasked with dealing with Covid-19 related corruption.

“They will also report on a six-weekly basis to the president on how far they are doing in curbing corruption, fighting those who are found with their hands in the till and making sure that people appear before courts to answer for their greed,” minister in the presidency Jackson Mthembu said in a post- cabinet media briefing on Thursday.

Ramaphosa to get report from 'fusion centre' on Covid-19 corruption...

The Unemployment Insurance Fund says it has resumed payments of the Covid-19 TERS benefits after a 24-hour delay, which it says was necessary to address potential fraud.

This came after the auditor-general's office, as part of a wider Covid-19 audit in state organs, “observed some control deficiencies and anomalies” in the online payment system.

“For a moment while dancing and doing the #JerusalemaDanceChallenge I forgot about the battle that I have just emerged from after beating Covid-19.”

Dora Nginza professional nurse Selina Ndokolo was one of 49 health-care workers on Wednesday who described their joy as they celebrated surviving the novel coronavirus by doing the popular African electro dance outside the hospital.

Scores of  employees at the hospital contracted the virus as SA and Nelson Mandela Bay health facilities grappled with a spike in the number of cases in the metro in recent months.

Universities in SA have been given until February to complete the 2020 academic year with the 2021 calendar set to start between March and April.

Higher education & training minister Blade Nzimande made the announcement on Wednesday during his update on Covid-19 alert level 2 measures in the post-school education and training sector.

He said institutions have reported different levels of responsiveness in terms of their progress in completing the requirements for the current academic year and the readiness to commence the 2021 programme.

An upcoming court case launched by companies in the hospitality industry against Santam on the payment of business interruption claims will probably provide legal certainty on this issue.

ICA is representing over 700 businesses in the tourism and hospitality sector in their fight to get insurance companies to honour their Covid-19 business interruption claims.

Covid-19 antibody test kits approved: what you need to know

Serological tests, a blood test that looks for signs of a previous Covid-19 infection, have been approved to be used as part of  SA's fight against the pandemic.

On Tuesday, the SA Health Products Regulatory Authority (SAHPRA) authorised the use of one rapid and point of care serological test kit.

Covid-19 antibody test kits approved: what you need to know

WATCH | 'You can never get used to death': Grave diggers tell their stories

Nomtu Magalela stands knee-deep in a freshly-dug grave at Cambrian Cemetery in Boksburg, on Gauteng's East Rand. A few metres below her feet is the coffin of an unknown person who died a few years ago.

The 56-year-old mother of two is clad in a blue City of Ekurhuleni overall, and her face is covered with a blue mask with an airflow valve in front.

A pile of red sand lies next to her. Today, she is doing a grave reopening after family members have requested to bury a second loved one in the same grave.

WATCH | 'You can never get used to death': Grave diggers tell their...