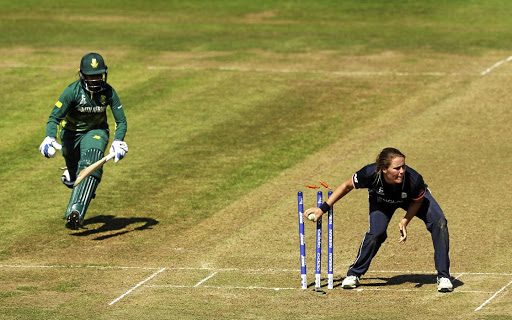 A change of scenery is generally held up as a good thing‚ but South Africa could have done without their World Cup campaign moving to Taunton for a match against Sri Lanka on Wednesday.

“It’s slightly different but fortunately we had some [practice] strips on the field so we got used to what conditions might be like‚” Mignon du Preez said after the South Africans’ first training session at County Ground.

“Our main aim was to make sure we get a feel of what the ground is like and what the pitch is like‚ and to see the different angles and how the wind’s blowing.

It's cricket, gents, not life and death

It's beyond all of cricket's boundaries that one of the key members of South Africa's dressing room in England is celebrating the arrival of a new ...
Sport
4 years ago

“We’re still finding out feet but I think we’ve got the worst out of the way.

“[The pitch] seems like it’s going to be a bit slower than what we’ve played on previously.”

South Africa’s first five matches in the tournament were in Leicester‚ Derby and Bristol — where they suffered their only loss‚ to England on Wednesday.

But they bounced back with a strong performance against India in Leicester on Saturday‚ when they won by 115 runs.

Another victory on Wednesday will make South Africa serious contenders for a place in the semi-finals.

The fact that Sri Lanka have lost all five of their games would seem to shorten the odds on another South African win.

But it also means the Lankans will be desperate to win.

The South Africans took their minds off all that after a trip of almost 300 kilometres from Leicester in England’s east midlands to Taunton in the south west on Sunday.

It's beyond all of cricket’s boundaries that one of the key members of South Africa’s dressingroom in England is celebrating the arrival of a new ...
Sport
4 years ago

“We bought some snacks and we had a bit of a movie night‚” Du Preez said.

“It was good to get some of the travel out after a long bus trip.”

“There’s something different this time‚” she said‚ and she should know as a stalwart of 103 one-day internationals‚ two previous World Cups and two other qualifiers for the tournament.

“We’re really enjoying each others’ company.”

And that’s showing on the field‚ where opening batsman Lizelle Lee has reeled off three half-centuries in four innings and — discounting Tuesday’s game between Pakistan and West Indies — was fourth among the the runscorers.

Also without factoring in Tuesday’s match‚ leg spinner Dane van Niekerk was the tournament’s leading bowler with nine wickets at an average of 6.66 and an economy rate of 2.68.

Nevermind what went wrong for South Africa at Lord’s on Sunday‚ how do they put things right for the second test at Trent Bridge in Nottingham on ...
Sport
4 years ago

Fast bowler Marizanne Kapp was third on that list‚ also with nine scalps taken at the none too shabby average of 18.88.

After shaky first match against Pakistan‚ when they suffered three runouts before sealing victory‚ South Africa have gained in confidence.

A washout against the fancied New Zealanders in their second game might have helped South Africa’s cause‚ but they have since proved their mettle with a 10-wicket win over West Indies — who were dismissed for 48 — and a convincing conquest of India.