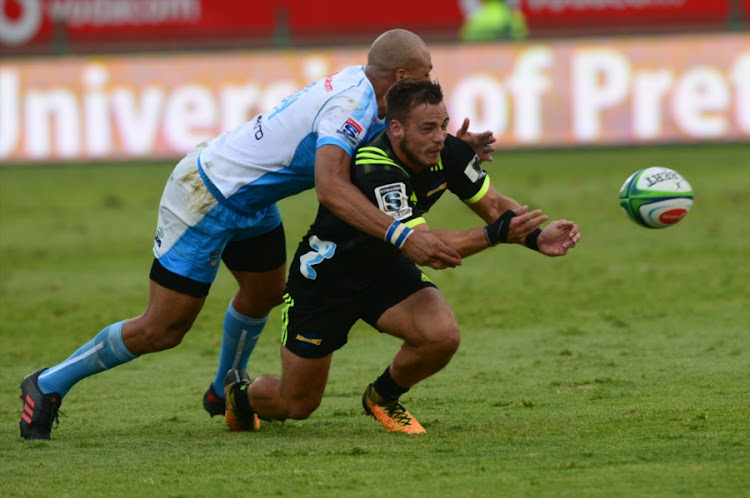 Travis Ismaiel of the Bulls tackles Matt Proctor of the Hurricanes during the Super Rugby match between Vodacom Bulls and Hurricanes at Loftus Versfeld Stadium on February 24, 2018 in Pretoria, South Africa.
Image: Lee Warren/Gallo Images

Sixteen is the magic number in Super Rugby‚ and it’s not to do with the optimum amount of teams in the tournament.

During this weekend’s semi-finals‚ the individual try-scoring record of 15 tries in a single campaign could be broken by two‚ and possibly‚ three players.

The Hurricanes sensation Ben Lam and the Crusaders try-glutton George Bridge will have first stab at trying to break the record‚ which is currently shared by five players‚ when the New Zealand sides clash on Saturday morning.

Lam has scored 15 tries this season and is one of the five players to have reached that mark in a season. Bridge has scored 14 so far in 2018.

Eight Sharks’ players have been added to the Springbok training group for this year’s Rugby Championship.
Sport
3 years ago

Odds are Lam will get there first but Bridge has been a consistent try scorer for Crusaders since his debut last year and already has 22 Super Rugby tries.

Later in the day the Waratahs’ 115kg behemoth wing Taqele Naiyaravoro‚ who also has 15 tries this season‚ could become the first to 16 tries if the other two fail to score in the earlier game.

The Waratahs take on the Lions at Ellis Park in the weekend’s second semi-final and on paper it appears that Naiyaravoro will have a good chance to add to his tally.

The Lions tend to have high scoring games against the Waratahs in Johannesburg with the visitors scoring on average four tries per meeting on the highveld.

But recent encounters are rare with this being only the third clash at Ellis Park between the sides since 2009.

Lam and Naiyaravoro have already joined elite company this season by reaching the 15-try mark.

In 1997‚ the second season of Super Rugby in the professional era‚ Brumbies wing Joe Roff scored 15 tries‚ which stood alone for eight years.

Crusaders wing Rico Gear joined Roff on top of the pile with 15 tries in 2005 and it took another 12 years before a Hurricanes centre Ngani Laumape joined the pair with 15 tries.

Former Sharks wing James Small‚ who scored 13 tries in 1996 when the Sharks went all the way to the final‚ holds South’s Africa’s single-season try-scoring record.