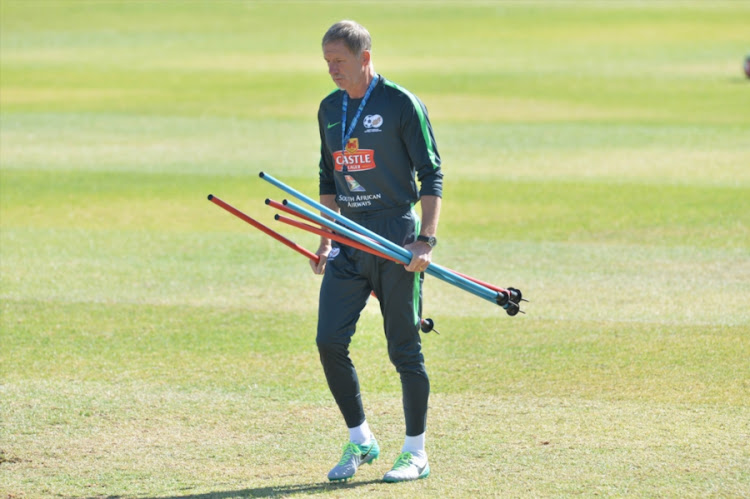 Stuart Baxter became the 25th dismissal in 25 years of Bafana Bafana football on Tuesday when he was sent off from the bench during the 2-0 win over Botswana in Tuesday’s Cosafa Caste Cup at Moruleng Stadium.

The Briton admitted afterwards he was in the wrong.

“I deserved to be sent off because I swore‚" Baxter said.

The depth of South African football got a positive airing on Tuesday as a rag-tag side‚ literally thrown together from available stock‚ overcame ...
Sport
4 years ago

"But my swearing was only making a stronger appeal that our doctor be allowed on the field to treat a player that lying (on the grass) with a head injury.

"I said: ‘My player is f-ing injured‚ it’s a f-ing head injury‚ let the doctor on‚ don’t tell him to sit down’.

"So I swore but I was trying to tell him my player has a head injury and before the doctor could get near him‚ another player‚ Cole Alexander‚ was kicked in the centre circle.

"But he (the fourth official) was telling the medical staff to sit down.

"I think you should get them (medical team) on as quick as you can.

"It was his (fourth official) job to say: ‘go on now quickly’.

"But he didn’t‚ I swore‚ he called the referee who came across and probably made one of the only good decisions of the evening and sent me off.”

Baxter will have to sit in the stands on Friday when South Africa contest the plate final against Namibia at Moruleng‚ effectively the play-off for fifth and sixth place at the 14-team tournament.

Baroka FC returned to preseason training this week and immediately reinforced their midfield stocks with the loan signing of former star Gift Motupa ...
Sport
4 years ago

The last dismissal for South Africa was Andile Jali in a World Cup qualifier against Angola in late 2015.

Baxter is the fourth coach to get sent from the bench‚ following Augusto Palacios in 1993‚ Trott Moloto in 2002 and Pitso Mosimane in 2012.

The first South African international red card was Phil Masinga in Zambia in only the country’s fifth match against Zambia in August 1992.