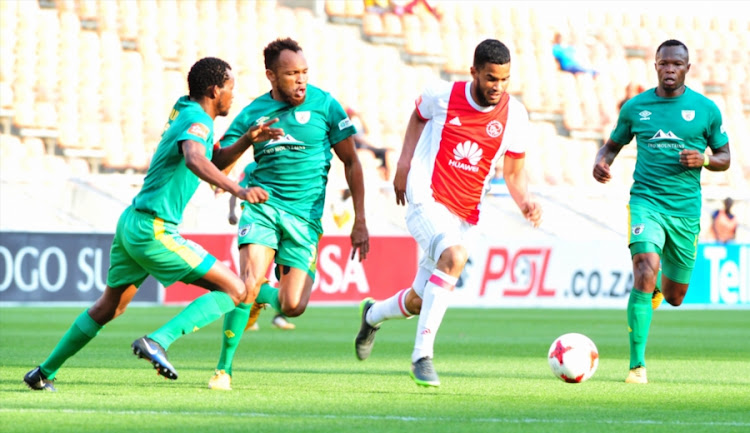 Ajax Cape Town striker Tashreeq Morris is looking to rebuild his career after two years of injury heartaches and hopes his goals this season can lift the Urban Warriors away from the relegation zone.

Morris will likely lead the Ajax line when they travel to Bidvest Wits in the Absa Premiership on Wednesday night‚ and hopes to add to his tally of three goals so far this campaign.

Still only 23‚ Morris was tipped for a move to Europe before being first injured in the 2015 Nedbank Cup final‚ and then being on and off the treatment table since.

“I’m happy with my fitness and happy that I have not been injured having been out for quite some time in the last two years‚” Morris told TimesLIVE.

“I didn’t play many games in that period‚ I had my ACL done‚ and I had osteitis pubis (hip injury)‚ which is a very rare injury. I struggled coming from that.

“Obviously as a striker you want to score goals. I haven’t scored much yet‚ I know I can do much better and score more goals for the team.”

Morris admits it was hard mentally as physically to cope with his injuries.

“It’s been tough‚ it took a lot from me‚ the rehab‚ the physiotherapy.

"It’s not nice for a footballer to come in to work to do rehab every day‚ you want to be out on the field with the guys.

“You do your rehab and just sit there‚ watching the guys train‚ it takes a lot from you emotionally.

"But I feel like I have come back stronger‚ fitter and personally I think a better player than I was before.”

He is now looking to bang in the goals to reignite his European dreams‚ but says foremost in his mind is to help Ajax move away from the relegation zone.

“The ultimate dream is to play abroad‚ but my personal goals go hand-in-hand with the team at the moment. We need goals and I want to score them‚ then the results will come.”

Morris admits that PSL strikers do not score enough goals and says it boils down to them needing to be more consistent in their performances and clinical in the box.

“I personally think it is a consistency problem with regards to strikers in the South African league. If you look at the leagues in Europe‚ you will see every season it is the same guys up there.

“Whereby in South Africa it differs from season to season.

"In England you will see a top striker like Harry Kane‚ will be there fore three seasons in a row. Here you will have a different name up there.

“As a striker you tell yourself you need to score‚ there is pressure‚ but I cannot put more pressure on myself‚ it may effect my performance.”

Morris says Wits’ league position at the foot of the table does not reflect the squad they have‚ but believes too that Ajax are better than their current position of 14th.

“They have got a very good squad‚ but like us‚ with the way we play‚ I don’t think we should be where we are on the table.”

Kaizer Chiefs’ home matches played in KwaZulu-Natal this season have alleviated a white elephant status for Moses Mabhida Stadium that has reached ...
Sport
4 years ago

Majoro back in Cape Town City squad but future not finalised

Cape Town City chairman John Comitis said striker Lehlohonolo Majoro is likely to stay with the club despite sporadic appearances in the 2017/18 ...
Sport
4 years ago

With just three games remaining before the traditional Christmas break‚ Platinum Stars defender Gift Sithole says they have set their sights on ...
Sport
4 years ago

Arsenal striker Olivier Giroud could lose his place in France's squad for next year's World Cup if he does not get more playing time at the Premier ...
Sport
4 years ago