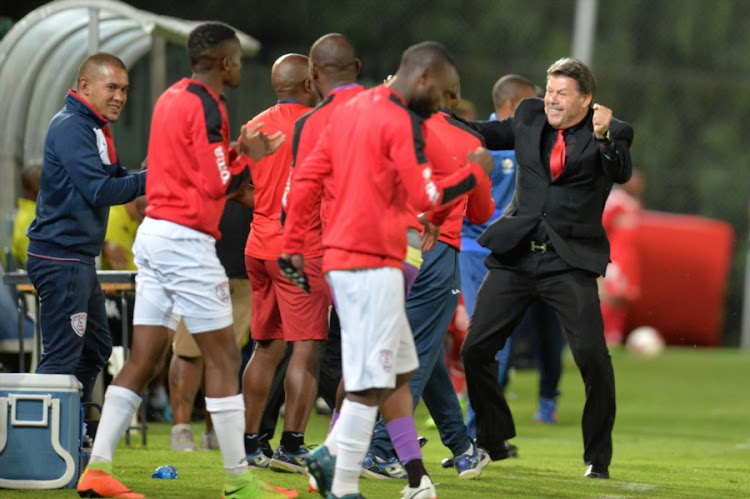 Luc Eymael has said that his Free State Stars side must remain humble and with their feet on the ground as they face the potential of moving into second in the Absa Premiership with a home win over Cape Town City at Goble Park on Saturday night.

It has been a remarkable turnaround in fortunes for a club that only secured their top-flight status on the final day of last season‚ but who have excelled under the Belgian Eymael in this campaign.

They have won four of their last five matches‚ and are seeking to win four league games on the bounce for the first time in almost three years.

And Eymael says that beyond this fixture versus City‚ further matches against Maritzburg United (home‚ January 20)‚ Ajax Cape Town (away‚ January 26) and Baroka FC (home‚ February 3) could go a long way to them sealing a top eight place – or perhaps even more.

“We have to remain humble‚ keep two feet on the ground and take it one game at a time‚” Eymael told TimesLIVE.

“I said to my players that the next four games are crucial and after those we will see if we will compete for top eight‚ or maybe even higher than the top eight.”

Eymael said he has no specific goals from club management‚ but has put the pressure on himself to try and steer the side as high up the league table as possible.

“When I signed here‚ nobody gave me a mandate on what to achieve.

“But I have put pressure on myself to achieve the top eight‚ because coming from last season where the team only just missed relegation‚ that would be a big‚ big achievement.”

Eymael confirms he has no injury worries ahead of the game‚ and feels the chemistry at the club‚ and with the team management‚ has been one of the reasons for their success this campaign.

“I am very happy at Free State Stars. When I arrived I found the players very well motivated‚ they are working hard and are committed to trying to succeed.

“I also found in front of me a very good committee‚ despite what people told me before I joined here.

“When it was announced that I would be coming here I had some phone calls from former coaches here who basically said I was crazy to take the job. But I have always found that it is best to form an opinion yourself.

“The Mokoena family (Stars’ owners) have been superb‚ we have a very good relationship and together we are trying to build this club.”

City are also seeking a fourth win in a row‚ having beaten AmaZulu‚ Mamelodi Sundowns and Platinum Stars‚ all by 1-0 scorelines.

That has made them the most likely challengers to Mamelodi Sundowns for the league title this season‚ and they could potentially end the weekend just a point back from the Brazilians with the same number of games played.

Left-back Ebrahim Seedat is not available for the game with his wife due to give birth any day now‚ but coach Benni McCarthy otherwise has a strong squad to select from.

Kaizer Chiefs struggled to provide conclusive previous work experience that might qualify Rob Hutting as a new technical advisor to the club as the ...
Sport
4 years ago

Former Glasgow Celtic and journeyman striker Amido Balde of Guinea-Bissau will arrive this week at Free State Stars for a trial‚ TimesLIVE is ...
Sport
4 years ago