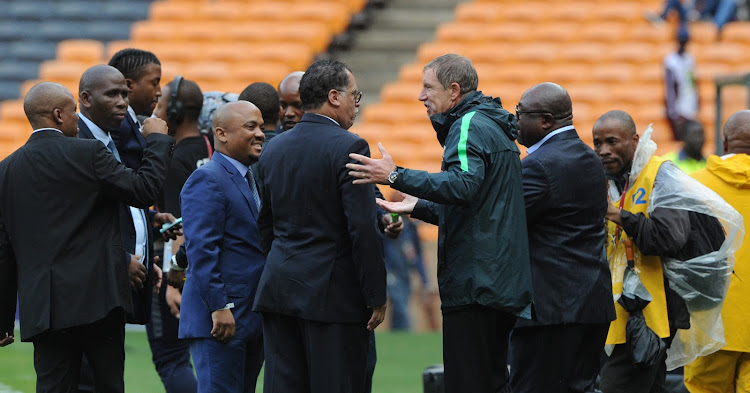 Stuart Baxter has asked the South African Football Association (Safa) to get their “house in order”‚ saying he only found out on Tuesday morning who Bafana Bafana’s opponents will be for this month’s Fifa international date.

Baxter said he had been hoping to travel to the King’s Cup in Thailand where Bafana would have met the hosts‚ Slovakia and United Arab Emirates.

Instead the coach has had to settle for games against Southern African rivals Zambia and Zimbabwe‚ opposition whom Bafana have met on countless occasions‚ making the friendlies between March 19 and 27 limited in worth for how much Baxter can learn from them.

“I’ve been massively upset this morning because we’ve only just finalised our fixture for this window‚” Baxter said at a meeting to brief journalists on his vision for the way forward for Bafana in 2018.

“We were going to go to Thailand. And after a long and winding road I’ve only just found out where we’re going.”

One of the elements of a “radical transformation” in approach Baxter outlined for Bafana was a far higher emphasis on introducing young players.

He said the King’s Cup would have presented the ideal opportunity to expose young players to varied international competition.

It also would have allowed the coach to assess who might be worth introducing during South Africa’s 2019 Africa Cup of Nations qualifying campaign‚ which resumes in September.

“I submitted a four-page report about what I believed could be an important springboard‚ and then there was another report about four years in bigger brushstrokes.

“What I said about the immediate was that the King’s Cup in Thailand represented an opportunity to give our players experience against Slovakia – Europe; UAE – the Gulf; Thailand – Asia.

“Three different styles‚ humid weather conditions‚ a full house. It would have been a great opportunity.

“For whatever reason that didn’t work‚ and that is not meant as criticism.

“But what I was thinking was let me take the youngest team that South Africa has ever sent and give them that experience.

“Now what we’ve got is a Zambia‚ South Africa and Zimbabwe‚ (and Angola) which Safa will release later because I don’t know much about it.

“But I think we’ve got to get our house in order because the way we’ve done this is all over the place.”

Baxter is working on a turnaround in 2018 for Bafana‚ who failed to qualify for this year’s Russia World Cup in 2017.

The South African Football Association (SAFA) will reveal Bafana Bafana’s programme of friendly matches for the coming months on Tuesday morning‚ but ...
Sport
4 years ago

Ayanda Patosi's return to Cape Town City was hailed by coach Benni McCarthy after the ex-Bafana Bafana midfielder scored a goal in the victory over ...
Sport
4 years ago