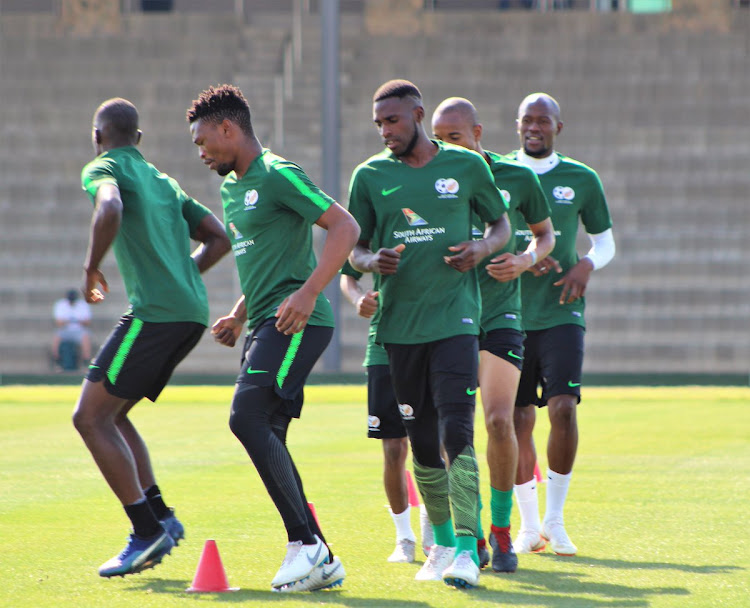 Bafana Bafana players go through their paces during training at Steyn City School in the north of Johannesburg on Monday November 12, 2018 ahead of their crunch 2019 Africa Cup of Nations qualifier against Nigeria at FNB Stadium on Saturday November 17, 2018.
Image: Bafana Bafana/Twitter

Bafana Bafana will hold a training camp in Tunisia at least one week before their key Africa Cup of Nations (Afcon) qualifier against Libya next month to maximise preparations for the crunch encounter.

Plans are going ahead to fix the camp for the weekend of March 15-17 now that the Premier Soccer League (PSL) have agreed to postpone some of their league games over the same dates.

Although the PSL have yet to issue a press release‚ officials have confirmed that SuperSport United against Kaizer Chiefs on Saturday‚ March 16 and two games on Sunday‚ March 17 - Bloemfontein Celtic at home to Bidvest Wits and Polokwane City at Cape Town City – will be rearranged.

The Premier Soccer League is to shortly make a decision on a request from the South African Football Association to postpone games ahead of the vital ...
Sport
3 years ago

Coach Stuart Baxter will take the bulk of his squad to Tunisia for preparations that weekend‚ getting a head start ahead of when he would normally have players available.

Bafana have to avoid defeat in the game to qualify for the finals in Egypt in June as the second-placed finisher in Group E.

They will be joined on Monday March 18 by both the European-based contingent as well as players from Mamelodi Sundowns and Orlando Pirates‚ who are in Caf Champions League action.

Ajax settle with PSL in relegation dispute, but refuse to give details

Ajax Cape Town have reached an undisclosed settlement with the Premier Soccer League over their relegation from the Absa Premiership at the end of ...
Sport
3 years ago

Sundowns will be playing at Wydad Casablanca in Morocco while Pirates will be completing their group campaign away at Horoya in Conakry‚ Guinea on Saturday‚ March 16.

Safa will then fly players from Pirates and Sundowns that have been called up by Baxter straight to the camp in Tunisia.

It will give the coach much more time to prepare than usual in a realisation that failure will be a major blow to South African football.