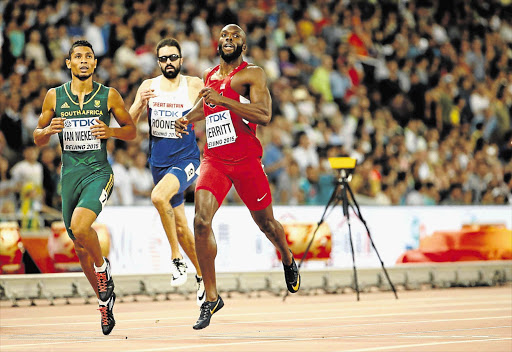 American 400m veteran LaShawn Merritt says he’s unfazed about going up against a rival as dominant as Wayde van Niekerk at the world championships in London in the coming days.

Merritt‚ the 2008 Olympic gold medalist and world champ in 2009 and 2013‚ spent the last Games and world championships watching the all-conquering South African phenom from behind.

“When I came into this sport I faced people who were dominant‚” the 31-year-old told journalists at the warm-up track at the Queen Elizabeth Olympic Park.

“I had Jeremy Wariner‚ I had a run myself‚ Kirani James [the 2012 Olympic champion]‚ so it’s nothing new for me.

“The only thing you can do is continue to work hard‚ and continue to lay it out on the track every time you step out there.”

Van Niekerk has run only two international 400m races this year‚ but he owns the world lead of 43.62sec.

Merritt has had an even quieter lead-in of late‚ having run only four 400m races this year‚ with a modest season’s best of 44.78 in early May.

He hasn’t competed since late May‚ even skipping the US track and field championships safe in the knowledge he had qualified as the Diamond Race champion in the 400m.

There’s no doubt who Usain Bolt will cheer for if the battle for the world 200m crown he’s relinquished comes down to a shoot-out between Wayde van ...
Sport
4 years ago

“It’s not my first world championships where I’m coming in and I haven’t raced in a while. “Professionals‚ you train hard‚ you line up and you go at it.”

In his absence the past few months‚ Fred Kerley has emerged as the top-seeded US competitor with a 43.70 personal best which ranks him second in the world behind Van Niekerk.

The 400m heats are on Saturday.