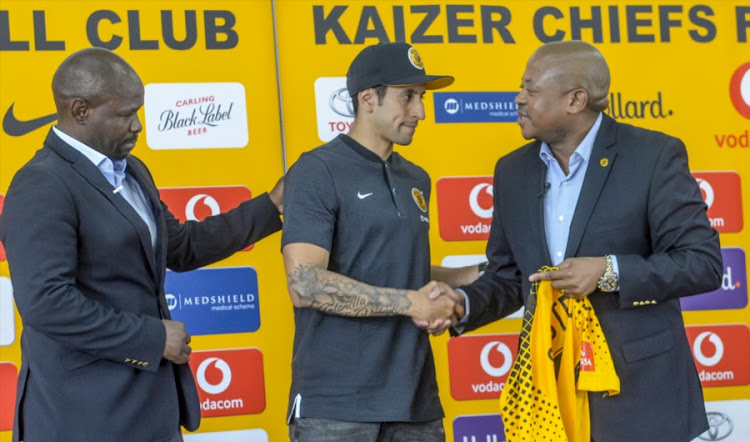 Steve Komphela says he is happy with the balance of his Kaizer Chiefs squad and admits he is “desperate” to get striker Leonardo Castro into action.

Komphela says the Colombian forward is fit and ready for action‚ but is waiting for the completion of his work permit.

When that comes through he is likely to be drafted straight into the side.

“We are waiting for him to get his papers and as soon as that happens‚ he is ready.

"If he had them last week we could have introduced him [against Polokwane City]‚ so we are desperate to get his papers‚” Komphela says.

“The guy is a finisher‚ he is unbelievable‚ he is class and that is what you want.”

Castro‚ who arrived from Mamelodi Sundowns‚ is one of three signings by Chiefs in the January transfer window along with attacking midfielders Siphelele Ntshangase and Kabelo Mahlasela.

They also promoted left-back Siphosakhe Ntiyantiya from the development side.

Mahlasela is likely to be out for four months after suffering a knee injury in his first training session with the team‚ but Komphela still feels his squad is now better balanced and that the club have addressed one of his concerns – their potency going forward.

“For far too long we have had problems on top [in attack]‚” Komphela said.

“Everything else is OK – at the back‚ in the midfield‚ it is all OK.

"But we were not that convincing on top and now we have strengthened there.”

Komphela also revealed that he expects Ntshangase to be fit for Sunday’s league visit to Baroka FC after he had limped out of the 2-1 victory over Polokwane City last time out.

“It was just an irritation‚ he is OK‚” the coach said.

Chiefs are currently fourth in the league‚ five points beyond leaders Sundowns‚ but in the midst of a good run of form.

They have taken 10 points from the last 12 available and have a crunch clash looming against The Brazilians on January 27‚ where victory could see them catapulted back into the title race.

After fighting hard but failing to get anything from their Premiership clash against Kaizer Chiefs at the weekend‚ Polokwane City coach Bernard ...
Sport
4 years ago