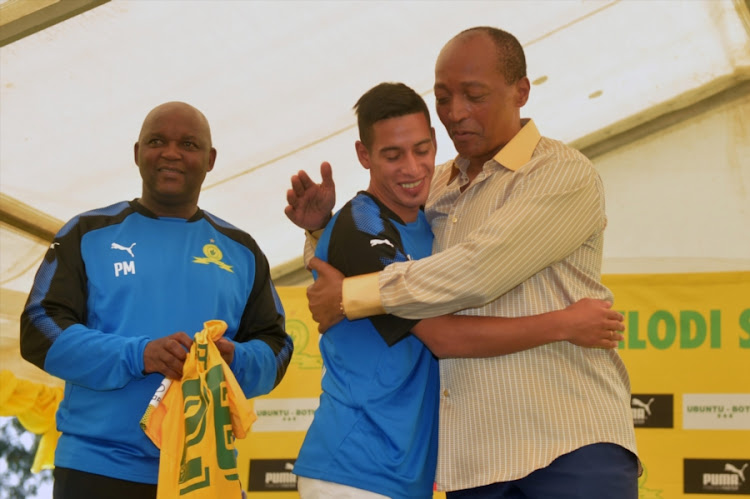 Mamelodi Sundowns coach Pitso Mosimane has hinted that new Uruguayan forward Gaston Sirino has been brought in as a potential replacement for Khama Billiat‚ who may sign for a European club this January transfer window.

Mosimane said 1‚66-metre Sirino‚ whose deal from Bolivian 2016-17 champions Club Bolivar La Paz was concluded on Tuesday‚ is a similar player to Billiat‚ the little Zimbabwean who was the attacking inspiration behind Downs’ 2016 Caf Champions League success.

“I did travel. I saw him play in two games. And what I saw‚ I was happy with‚” Mosimane said.

“Whether it’s going to be the same in South Africa I cannot guarantee.”

Sirino (26) had his best season signing for Bolivar last campaign scoring 18 goals in 41 league games in a convoluted two-group format.

Youtube footage shows him to be quick-footed in the Billiat mould‚ and similarly capable of exploiting pockets of space.

“Sirino is the kind of player who has the qualities of a Khama Billiat‚ of a Percy Tau or Aubrey Ngoma‚” Mosimane said.

“I think the body size will tell you that he’s not a No. 9. He’s got speed. He’s an intelligent player. So that’s why we brought him here.”

Mosimane appeared to hint that Billiat might be on his way in this transfer window.

“The ‘CBD’ is gone or is going – maybe there’s one left‚” Mosimane said‚ in a reference to the one remaining member of that combination‚ Billiat‚ who is thought to be on his way to a European club.

The other two parts of the triumvirate who caught fans’ imaginations as Sundowns won the PSL in 2015-16 have been sold – Keagan Dolly to Montpellier a year ago and Leonardo Castro joining Chiefs late last month.

Mosimane continued: “But we have to make sure that Sundowns stay on top.

“Sundowns are a top club. The CBD did not play in the past year and Sundowns are still on top of the log and playing convincing football.

“So Sirino is part of a future. The supporters play with the names and probably we will have another combination.

“But the good thing is we did these signings very quickly.

“He’s never a central midfielder when you need one – he’s direct‚ to replace the CBD.

“I don’t say that they (the signings) will do that immediately.

"But I say they have the capacity to. And maybe even stronger.”

Mamelodi Sundowns stand to lose two of their top players‚ most likely to Europe‚ before the end of the month‚ said club president Patrice Motsepe as ...
Sport
4 years ago