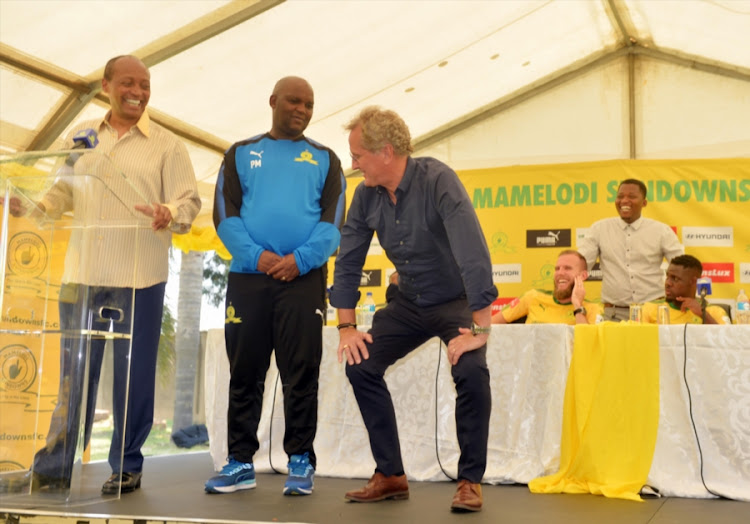 The mining magnate described Mosimane as “Sundowns' most successful head coach” as he moved swiftly to dispel growing perception that the 60-year-old Swedish coach is being lined up for the plum job.

"He (Hamren) is our new head of technical department‚ but he will also make a contribution to the senior technical team‚" said Motsepe‚ who reserved most of his praise for Mosimane.

"Erik will help us with our academy‚ making sure that some of our young boys will consistently form part of the senior team‚ play for Bafana Bafana and go overseas.

"Erik will also work with our senior technical team under Pitso's leadership.

“It's a continuous exchange of ideas."

Mosimane acknowledged Hamren's role‚ stating that with his "vast experience in football" he would add value to the club. "Eric has got so many years‚ many years more than me.

“He's also here to help the senior team also‚ not only the youth.

"We'll teach him the culture of the country because South African football is very different to European football.

"But he can't be coaching Sweden for seven years and not have anything to contribute to the success of Sundowns.

"He's welcomed to help us."

Hamren comes to Sundowns with an impressive CV topped by his coaching of the Swedish national team between 2009-2016.

The former footballer had numerous spells as coach in top Scandinavian clubs and also won the league title with Norway’s Roseborg BK in 2008 with South Africa’s Siyabonga Nomvethe as one of his strikers. He also had Benedict Vilakazi in the same team for five months.

Both players were brought to Hamren by Mike Makaab‚ the same agent who played role in his move from Sweden to Sundowns.

Hamren himself clarified his role‚ saying the head coach is always responsible for the team.

The Swede said he is looking forward to learn from Mosimane and he added that he would he have to form a good relationship with the Brazilian’s head coach for the club to succeed.

"The first team is always the most important in the club because it's the face out‚” he said.

"The results there are very important. Pitso's got huge knowledge of football‚ especially South African football.

"I want to learn a lot from him and I'm sure he's going to learn something from me.

"If he can find a good mix in that‚ I'm sure it will be good for the club. "My first thing here is to watch‚ learn and listen. My ambition is to help the club to continue doing well."

Keagan Dolly made a first start for French Ligue 1 side Montpellier in five months on Wednesday in the 1-1 draw with Bongani Zungu’s Amiens‚ a sign ...
Sport
4 years ago

SuperSport United's 1-0 Absa Premiership victory against Maritzburg United at Harry Gwala Stadium in Pietermaritzburg on Wednesday night was built on ...
Sport
4 years ago

Mamelodi Sundowns coach Pitso Mosimane has hinted that new Uruguayan forward Gaston Sirino has been brought in as a potential replacement for Khama ...
Sport
4 years ago