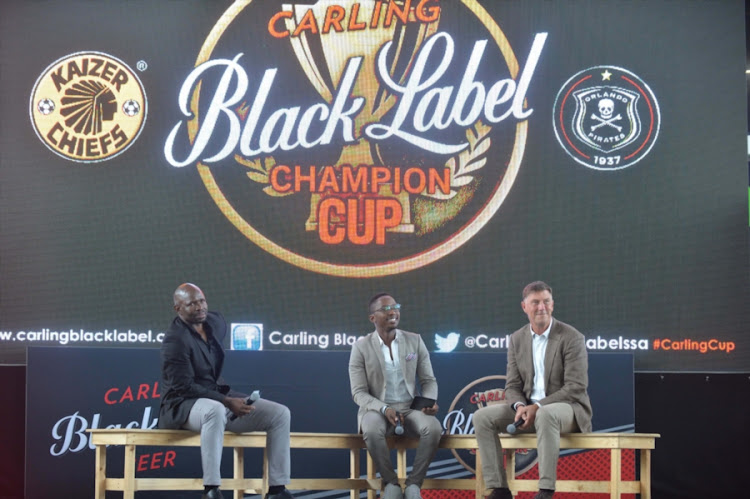 Carling SA’s brand director Samori Gambrah has admitted that he does not have the answer to fans’ demands for a new format to the preseason Black Label Cup.

Speaking at a press conference on Wednesday to publicise the July 29 game‚ Gambrah also admitted that the corporate social investment of the pre-season Carling Black Label Champion Cup between Kaizer Chiefs and Orlando Pirates leaves a lot to be desired.

On the exclusionary format of the preseason kickoff to the season‚ Gambrah said: “I just want to say that the Carling Cup‚ at its inception seven years ago‚ was around giving the fans a voice.

Almost all the PSL clubs have reported back to preseason training. TimesLIVE takes an in-depth‚ club-by-club look at how they are shaping up as they ...
Sport
4 years ago

“We are not in bed with any specific club. I think its passion is just to bring that voice and the power back to the fans.

“Now‚ we’re not oblivious that fans have been asking for a different format. I don’t have the answer.

“But I think what’s key is that we start this conversation and we allow it to actually happen.

“But I don’t want that to take away from the amazing campaign that the Carling Black Label Cup is. We’re at 5‚7 million votes and will at minimum double last year’s votes.”

The Carling Cup replaced the immensely popular annual Telkom Charity Cup (before that named the Charity Spectacular) in 2011.

Kaizer Chiefs’ three transfer-listed players are yet to receive offers from rival clubs‚ and they are showing “positive signs” that just might ...
Sport
5 years ago

The new format involves a gimmick where fans voted by SMS or online for their starting line-ups‚ and during the match for substitutions.

The Charity Cup had involved a voting system to decide its four participant clubs. What made it most popular was that the gate-takings went to charity.

At the inception of the Black Label Cup seven years ago‚ PSL and Pirates chairman Irvin Khoza had made assurances that the new “tournament” would make some allowance for corporate social investment.

Gamrah‚ astonishingly‚ admitted this aspect has been sorely lacking so far.

“We’ve previously been part of a CSI drive‚ which I’ll be very honest with you‚ hasn’t been great‚” he admitted.

“We are looking to find a better way to impact the community. But I can’t lie to you – I don’t believe the work we’re doing is amazing.

"And I want to get to amazing‚ but I’m three months into this job to get there.

“But it’s not something I would rave about.”

Gamrah said he did not believe a Twitter campaign to boycott support for the event had much impact.

Organisers of the Black Label Cup have consistently denied that it is less popular than the Charity Cup was‚ pointing to attendances (it is always sold out‚ and this year there are just 19 000 tickets left) and the high voting numbers.

Bruce Bvuma was inspired to take football seriously by a man he now calls a teammate.
Sport
4 years ago

However‚ each SMS vote can only be made with a code obtained from the purchase of a Black Label beer‚ and each SMS generates its own revenue‚ and the sponsors earn immense brand mileage.

Yet little of that finds its way to charity.

This money-spinner based on the immense popularity Chiefs’ and Pirates’ brands appears aimed at one thing only‚ enriching the two clubs and their sponsor.

And in that format‚ it will never earn a true place in the hearts of the fans.