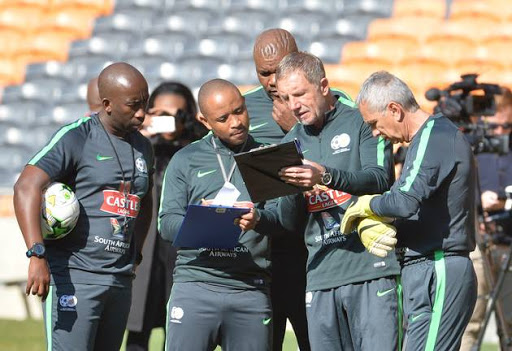 Stuart Baxter expects a similar kicking treatment from the Zebras of Botswana in Saturday’s African Nations Championship (Chan) qualifier as what Bafana Bafana experienced in the Cosafa Cup this month.

Botswana have appointed a new coach since they were beaten 2-0 in a Cosafa plate semifinal in Moruleng on June 4 by SA in a match marked by physical horseplay from the Zebras‚ where Baxter was red-carded for swearing at the fourth official.

Oris Radipotsane took charge of that game as caretaker after the departure of Englishman Peter Butler to join PSL club Platinum Stars.

Masalesa declared ineligible to play in Bafana's qualifier in Botswana

Defensive midfielder Lehlogonolo Masalesa is not eligible for Stuart Baxter’s developmental Bafana Bafana to meet Botswana in a Chan qualifier ...
Sport
5 years ago

Botswana have since appointed former Santos‚ Bay United and Thanda Royal Zulu coach Major David Bright‚ so titled due to his once army rank‚ as head coach.

Baxter‚ though‚ expects Botswana to be physical again in the first leg of his developmental Bafana’s Chan qualifier in Francistown‚ 400 kilometres north of Gaborone‚ near the border with Zimbabwe.

“It was a very physical game. I think they got a lot of stick (at home) not because they lost to us‚ but because of the way they played. People in Botswana don’t want them to play that way‚” Baxter said on Thursday recalling this month’s Cosafa meeting with Botswana.

“Now‚ from all reports the coach who’s taken over is not different in his approach. So I’m expecting a bit of a bruising game.

Botswana have named a full-strength side for their African Nations Championship qualifier against South Africa‚ including Player of the season ...
Sport
5 years ago

“So‚ yeah‚ I think it will be a tough game. But we have an experience of them‚ and we know that if we play well‚ we know we can get a result to bring back here.

“It’s a bit like the Champions League. You’ve got to bring them back here with a result that you can play on.”

Lehlogonolo Masalesa has been withdrawn from Baxter’s squad as the Confederation of African Football (Caf) have ruled the former Orlando Pirates midfielder ineligible for the Chan‚ a tournament for local-based players.

The defensive midfielder had been recently out of contract with previous club Larissa in Greece‚ but Caf rules state a player has to be registered with a club in his country to participate in the Chan.