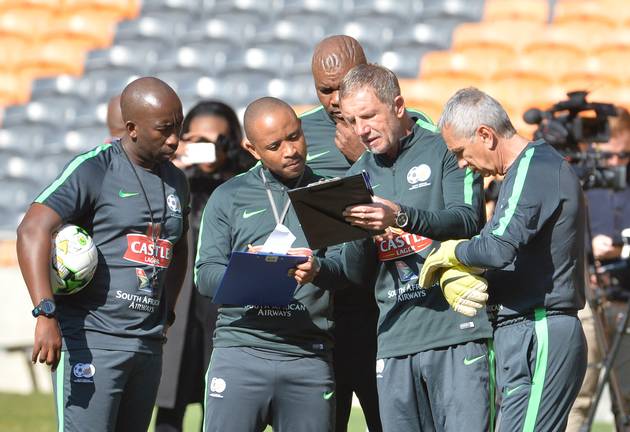 Bafana Bafana coach Stuart Baxter could be headed on a collision course with the Confederation of African Football (Caf) after he named midfielder ...
Sport
4 years ago

The Briton was assisted by Amajita mentor Thabo Senong and goalkeeper coach Alex Heredia in the recent Cosafa Cup‚ where Bafana won the plate final after beating Namibia 1-0 in the North West‚ and the duo will continue in their temporary roles when the national team plays Botswana over two legs in the CHAN qualifiers in the coming days.

Speaking this week as Bafana prepare for the away trip to face the Zebras in Francistown in the first leg on Saturday‚ Baxter said he has not had time to thoroughly discuss the matter with his employers at Safa House.

“Since I came to the national team‚ I probably have had four days at Safa House‚" the Bafana coach said.

"So‚ it’s difficult because there are lots of things that we had on the agenda and we have not been able to put to bed because I have just never had time.

"I have made a couple of recommendations‚ we have spoken but we have not been able to put things to bed.

"We just have not had time and with these things you need to sit down and have a meeting.”

South Africa will start their fourth qualification campaign for the African Nations Championship (CHAN) when they travel to Botswana this weekend ...
Sport
4 years ago

South African Football Association (Safa) president Danny Jordaan said a few days ago the Briton had been given time to mull over his decision and he would be expected to finalise the issue after Bafana's participation in the Cosafa Cup and in the CHAN qualifiers.

“We have asked Stuart (Baxter) to go through the Cosafa Cup and the CHAN tournament and then make up his mind‚" Jordaan said.

"If he can give us his final list before CHAN that will be well and good and if he is going to do it after CHAN we will have to wait on him.

"He is making his own assessment and he will make the recommendation.

"We said that we want to see opportunities for local coaches in the technical team‚ and in particular the one that we think has the potential to become a Bafana Bafana coach in the future.”

While he did not commit himself to an exact date‚ Baxter said he is likely to make the decision immediately after the two-legged CHAN qualifiers against Botswana.

“I am guessing it will be after this camp‚" Baxter said.

"It has been a hectic period and it is going to be the same all the way to 2018 World Cup qualifier against Cape Verde next month.

"Virtually‚ I have not had a day free from squad selection‚ squad training and travelling to games since I took over.

“Even if the president were to come to the camp‚ I don’t know where I will be able to squeeze him in because we are working all the time.

"I am saying that with due respect to him.

"I don’t think realistically we can do this properly because negotiations need to take place‚ there are options to be weighed in properly.