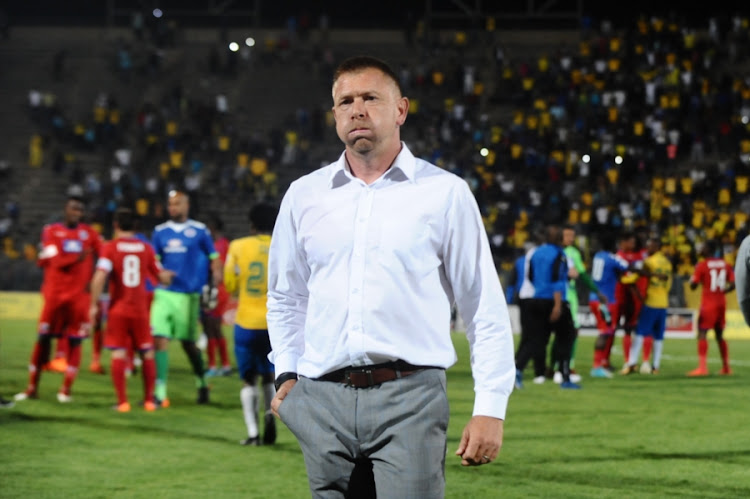 Eric Tinkler’s last spell in the Mother City was covered in glory as he took Cape Town City to third place and a trophy in their maiden season.

But the fickle nature of the game is no better exemplified than the struggles he is under at SuperSport United after changing jobs in the off-season.

“It’s been very difficult to be honest‚" he said after Wednesday’s 2-0 loss to Ajax Cape Town at the Athlone Stadium threatened SuperSport with the possibility of being sucked into a relegation dogfight.

"The players respond off me and I’ve got to be brave enough to take the responsibility for the losses and I’ve also got to keep the players motivated to get the results.

“It’s a completely different scenario to what I faced (last season). It’s been a long season … or seasons … for these guys and we’ve just got to find ways to ensure we pick up maximum points in our next seven games.”

Tinkler said he still felt a desire for success despite the obvious turmoil at the club.

“My hunger has always been there‚” he added.

“I have to remain positive and believe we have enough depth in our squad to get us out of this conundrum that we find ourselves in.

Tinkler said it would now be a mental test with a home game next against high flying Maritzburg United at Atteridgeville on Saturday.

“We can’t keep saying week in week out that we are too good a squad to be sucked down into the relegation battle.

"It’s just the harsh reality. That’s where we find ourselves right now and we’ve now got to be strong enough mentally to get ourselves out of the position.

“We need to obviously‚ at the training ground‚ relay that message to the players that we need to get a result against Maritzburg and that we can’t allow complacency or the confidence to drop.

“I’ve seen us play much more worse than we did against Ajax.

"I kind of take the positives from that but we still have to be a lot better; going forward when we have to and insuring things at the back.

“We cannot‚ week in‚ week out‚ be talking about the same thing and continue making the same mistakes. We have to rectify that‚” the coach added.

Victory for Ajax Cape Town over SuperSport United on Wednesday came as part of a slow process that has seen coach Muhsin Ertugral try to fix matters ...
Sport
4 years ago

The atmosphere and all the euphoria that goes with the Soweto derby between Kaizer Chiefs and Orlando Pirates could have an adverse effect on the ...
Sport
4 years ago

Kaizer Chiefs coach Steve Komphela is clearly growing increasingly frustrated at what is‚ in fact‚ a plainly incorrect common perception that his ...
Sport
4 years ago

Kaizer Chiefs coach Steve Komphela has laid his cards in the table and said that whoever wins the Soweto derby on Saturday stands a chance of ...
Sport
4 years ago