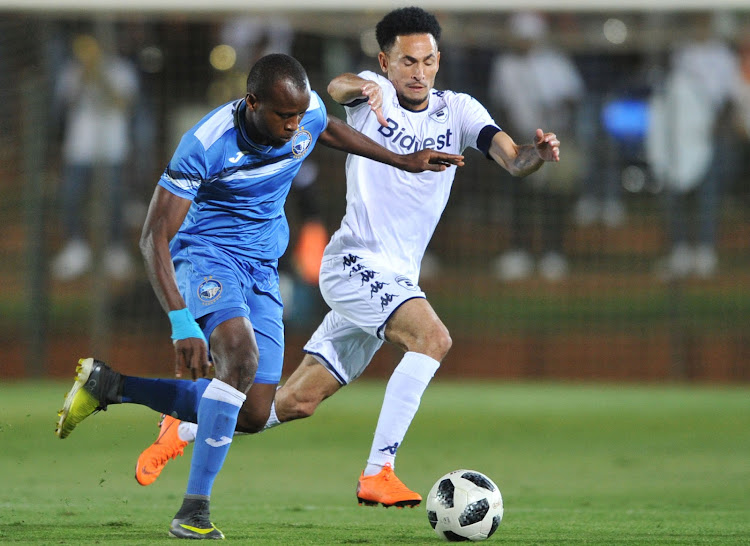 Bidvest Wits were held to a 1-1 draw by Enyimba in Friday night’s first leg of their Caf Confederation Cup second round tie at Bidvest Stadium.

The goals came early, from Daine Klate for Wits in the fourth minute and Mustapha Ibrahim equalising in the fifth.

That was where the score remained, though Wits did see a string of chances kept out by former Orlando Pirates goalkeeper Fatau Dauda.

How hungry Wits, who entered the Confederation Cup as penalties first-round Champions League losers against Angola’s Primeiro de Agosto, are for progression in continental football right now after the domestic hiatus they have suffered is open to question.

The Clever Boys put up a good show at putting up a credible performance, though if there was any genuine urgency, that was well disguised too.

Enyimba are a solid combination – typically of a Nigerian side, big and physical; organised in defence, technically sound in midfield and quick and powerful up-front.

They seem entirely capable of powering past Wits in Aba on April 17.

The Clever Boys – probably understandably for a team for whom the 2017-18 league season as champions, which should have been about challenging, has instead been a hard slog out of the bottom after an abysmal start – rested some players.

If Wits were ultra-keyed up for the Confed group stages, and for no off-season (the last of these, as at the end of the year Caf aligns itself with the northern calendar), which would almost invariably mean next season would be a write-off too, they would have played a full-strength combination.

Coach Gavin Hunt, without putting out a second-string team, did have a fair number of fringe players on the field.

These included Klate – no longer a regular this season – at left midfield; and Thobani Mncwango and Eleazar Rodgers up-front.

But the presence of heavyweights Reeve Frosler, captain Thulani Hlatshwayo and Sifiso Hlanti in defence, Edwin Gyimah back from suspension in midfield and Sifiso Myeni on the right in attack, meant this was a mixed-strength combination, and one certainly capable of a performance.

Wits gave that in the first half, though they seemed a little surprised to open the scoring so early.

Myeni’s cross from the right was half-cleared, then somehow headed across his own goal by defender Oladuntoye Isiaka, falling for Klate to tap in a volley at the left upright.

Enyimba seemed as startled to equalise within a minute. A defensive error allowed pacey striker Ibrahim to run through and shibobo a finish through Josephs.

Wits had chances to regain the lead, notably Mncwango heading wide, and a diving header should have been in.

Within the first minute of the restart Frosler ran unchecked onto Klate’s cross and his low volley beat Dauda but was cleared off the line by Nelson Ogbonnaya.

Rodgers, three times, and Khumalo once, forced more saves from Dauda. But Wits could not add a crucial lead to take to Nigeria.

Chippa United believe they can inflict damage on Kaizer Chiefs

Chippa United have stayed behind in Johannesburg for their next Absa Premiership fixture against Kaizer Chiefs with coach Vladislav Heric confident ...
Sport
4 years ago

Highlands Park will clinch the National First Division (NFD) title and promotion back to the Premier Soccer League (PSL) if they win or draw against ...
Sport
4 years ago

Mamelodi Sundowns are bracing themselves for all-out attack from ‘cocky’ Baroka FC when the league leaders make the trip up the N1 to Polokwane for ...
Sport
4 years ago

Former African champions Enyimba are expected to attract some lively expatriate support at Bidvest Stadium on Friday night as they meet hosts Bidvest ...
Sport
4 years ago