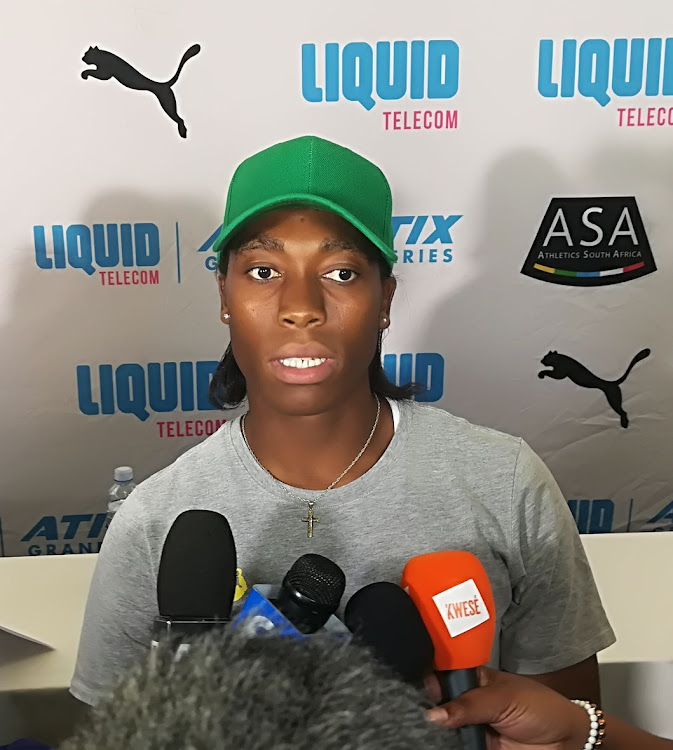 Caster Semenya is aiming to break the 1000m South African record that has been standing for 35 years when she competes in the Liquid Telecom Athletics Grand Prix at Tuks Stadium on Thursday night.

The 27-year-old double Olympic champion‚ who was pipped by American tennis great Serena Williams for the Laureus World Sportswoman of the Year award in Monaco last week‚ said on Tuesday she is focused on breaking the 2:37.2 record that was set by Ilse de Kock Wicksell in 1983.

“Breaking the 1000m record is the target for me‚” she said with a smile during the official press conference in Pretoria.

“I am more mature‚ we have practiced the splits and understand how they are allocated and how I need to run.

"I will focus more on the first 800m‚ I will know when I hit the 800m mark whether the record is gone or not.

"The main target is to go at least two minutes or under in the 800m and that will determine how fast I can go.”

Her attempt at the record is not going to be an easy one as she faces stiff competition from Ugandan runners Winnie Nanyondo and Halimah Nakaayi in what will be their first competitive race in this event.

“It is exciting because I am always racing in international competitions in Europe or America and never at home‚" Semenya said.

"So to face Winnie and Halimah at home is fantastic for the sport and I know they will want to run fast. I saw them run in Roodepoort and they mean business.”

De Kock-Wicksell‚ who will be at Tuks to watch the race‚ said she is happy that her record is likely to be broken by a South African.

“I am happy that someone will finally break the record.

"Records are there to be broken and I will be there to witness it if it happens.

"Caster has done well for the past few years and has made the country proud. My advice to her is that she must make sure that she hit the 800m under two minutes.

"But‚ she must not be under any pressure. She must go out there and enjoy the race‚” said De Kock-Wicksell‚ who works at Tuks.

The Ugandan athletes are keenly anticipating the race against Semenya and they are hoping to cause an upset.

“This is why we came to South Africa‚ we want to race against Caster on African soil because it is important to us‚” said Nanyondo.

“You know this will be an aggressive race with Caster in the mix.

"She is not scared of pushing the pace‚ so we know this will be a hard race‚” said Nakaayi‚ who won the 800m in Roodepoort last week.

Anaso Jobodwana will compete in what is arguably his toughest 200m assignment on South African soil when he races in the first meet of the Athletix ...
Sport
4 years ago