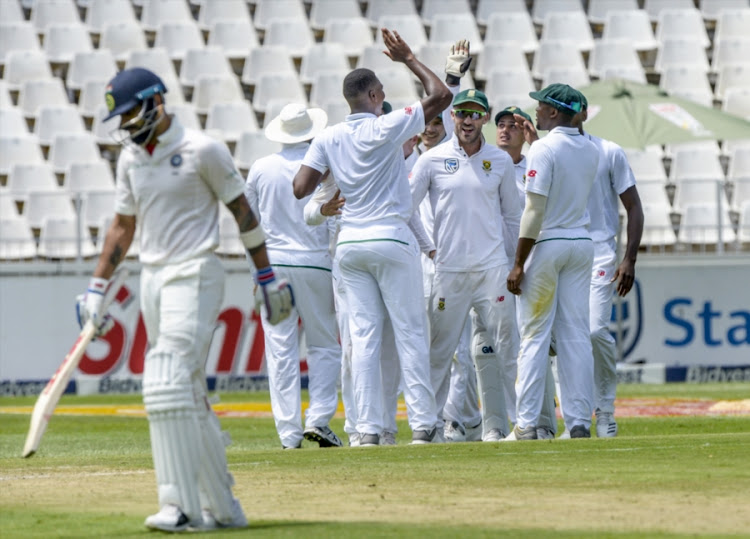 South African players celebrate with Lungi Ngidi for the dismissal of captain Virat Kohli of India during day 1 of the 3rd Sunfoil Test match between South Africa and India at Bidvest Wanderers Stadium on January 24, 2018 in Johannesburg, South Africa.
Image: Sydney Seshibedi/Gallo Images

South Africa managed to bowl India out for a modest 187 on the first day of the third and final Test at the Wanderers in Johannesburg on Wednesday before they reached stumps on 6/1.

Dean Elgar and night watchman Kagiso Rabada will resume on Thursday morning on respective scores of 4 and 0 after the early loss of Aiden Makram who was caught behind by keeper Parthiv Patel off the bowling of Bhuvneshwar Kumar for just two runs.

During the India first innings‚ only captain Virat Kohli and Cheteshwar Pujara managed to score half centuries and a combined score of 104.

The rest of their team-mates put together 57 runs on the board and this is the same challenge faced by the Proteas' batsmen.

The delinquency of the pitch was further illustrated by the fact that there were a total of 34 maidens during the day where 11 wickets fell.

Also‚ Kohli took 106 balls and 146 minutes on the crease to score 54 runs while Pujara had to grind for just over four hours in his knock of 50 runs where he faced a whooping 179 balls.

The South African top order of Elgar‚ Hashim Amla‚ AB de Villiers‚ Faf du Plessis and Quinton de Kock must negotiate carefully as they are going to be put under pressure by the Indian fast bowlers.

The day started positively for the Proteas as India went to lunch on 45/2 after 27 overs after Vernon Philander and Rabada removed openers KL Rahul and and Murali Vijay inside ten overs as they struggled to acclimatise to the conditions.

Two wickets followed in the second session with Kohli‚ who was dropped twice by Philander and De Villiers‚ finally becoming the victim of Lungi Ngidi for the second time in this series and Anjikya Rahane was removed by Morne Morkel for nine runs.

India's middle and lower order collapsed in the third session and they lost Cheteshwar Pujara and dangerman Hardik Pandya (0) from the bowling of Andile Phehlukwayo and Parthiv Patel (2) from Morkel within eleven balls.

Then‚ Rabada cleaned out Mohammed Shami‚ Ishant Sharma and Kumar as India were finally bowled out for 187 with eleven overs left in the day and four minutes before five o’clock.

Quinton de Kock‚ who has struggled in this series with the bat‚ accounted for five catches in what was a highly successful day in the office for him with the gloves behind the stumps.

This is the first time India have been bowled out on the first day of a Test in South Africa.