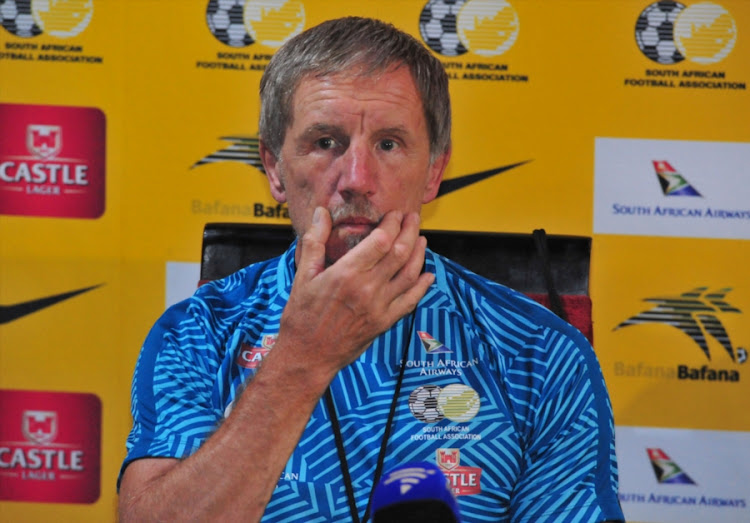 Bafana Bafana coach Stuart Baxter says he is willing to lose his job for saying it‚ but South African football as a whole needs “gardening of its weeds”‚ and an effective overhaul‚ to escape a Groundhog Day of failure.

Baxter this week promised an emphasis on youth in Bafana selections starting from their matches this year‚ but said SA football‚ from his perspective‚ needs to get its house in order or any national coach is destined to fail.

“I believe that in the games coming up‚ we’ve got to do two things this year.

"We have got to try and tidy up the garden‚” he said as he outlined his vision for 2018‚ and plans for a turnaround for the national team following last year’s failure to reach this year’s Fifa World Cup in Russia.

“When I say garden‚ I use that because there are plenty of weeds.

“If you take a poll of the players who have played for Bafana over the last 10 years‚ our marks out of 10 are not going to be too good.

“It’ll be that their (plane) tickets are not on time‚ and ‘they (Bafana and Safa) don’t call my club’‚ and they’ve got no contact with the (Bafana) coach‚ and that ‘He never comes to see me play in France’.

“And with the clubs‚ the same thing. I was there. It’s‚ ‘Ah‚ Safa don’t do this and Safa don’t do that’. At Safa House we say‚ ‘They’re not patriotic and don’t release their players’.

“And there’s this sort of antagonistic approach. Unless we can have some sort of cooperation … I think we will just be a reflection of the hostilities.

“And on the playing level‚ some of the more experienced players may be casualties. Because in some way we have got to get some of these young kids on the field.

“And I’ve told the FA‚ ‘Look‚ I could stay or I could go; they can fire me‚ or I could resign because I don’t think I’ve got the possibility to do a job’.

“But whoever’s the coach‚ for me‚ if they don’t take this sort of step and say‚ ‘This is what we should do’‚ I don’t think we’ll have a future.”

Baxter said‚ apart from fast-tracking youth into Bafana‚ South Africa’s development structures‚ including at clubs‚ have to improve.

“I just believe that in this country it’s so difficult and complicated. Yet‚ if we could get it right‚ it could be so beautiful‚” he said.

“But we’re not going to get it right if we keep on replicating. And I’ve looked back‚ and it doesn’t matter who was coach‚ but in some way it’s screwed itself up.

“It doesn’t matter if it was Pitso (Mosimane)‚ or was it Gordon’s (Igesund) fault‚ or Shakes’s (Mashaba) fault or Carlos’s (Parreira) fault.

“Who’s fault was it? I think it’s the whole system and the way we’ve perceived our development‚ not working.

Bafana‚ who last played in a 2-1 World Cup qualifying defeat against Senegal in Dakar on November 14‚ begin this year against Zimbabwe and Zambia in the March 19 to 27 Fifa international date.

They resume their 2019 Africa Cup of Nations qualifying campaign at home against Libya in September.

Stuart Baxter has asked the South African Football Association (Safa) to get their “house in order”‚ saying he only found out on Tuesday morning who ...
Sport
4 years ago